Make recital prep a breeze with my free planning guide! get the guide 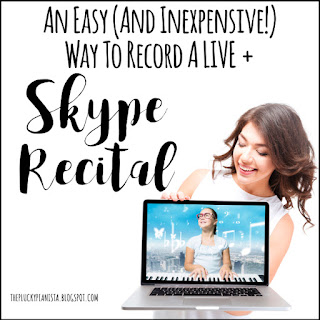 I wanted to re-publish this post so that anyone who needs it during this time of school closings and online lessons can find it. The information about the recital itself is current and valid, and there are lots of great tips. Since the time this article was written, Skype has introduced a way to video calls live, and Zoom has become a favorite way to teach and record simultaneously as well. 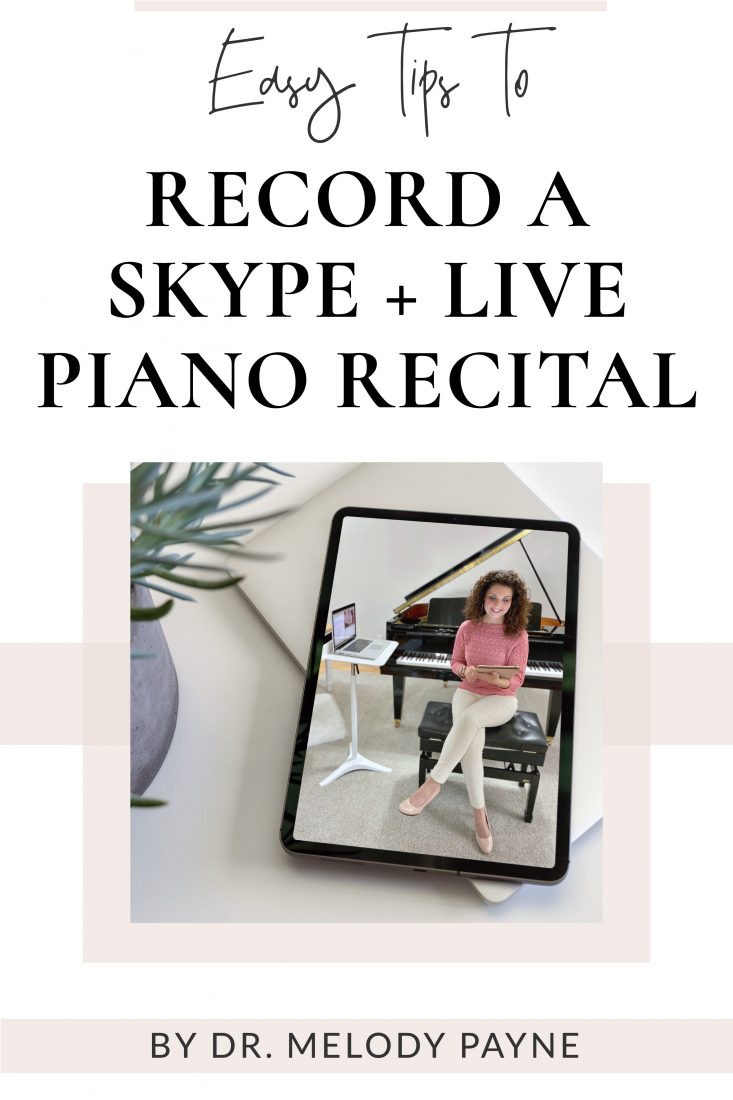 In October we held our “Happy Fall, Y’all!” costume recital, and seven of my pre-college students performed: one live via Skype from Louisiana, and six here in the studio in Virginia. I previously wrote about my Skype piano experiences here.

My students have been preparing for our local MTA’s annual Hymn Festival in November, so I thought this would be a great opportunity for them to practice performing in a casual setting.

Each student played one hymn arrangement, plus one additional piece. Memory was not required.

Before each performance, students read a brief “script” including their name, age, grade, how long they had been taking piano lessons, and what pieces were being performed, as well as the composer of the pieces. Students were welcome to dress in costume, but it was by no means a requirement.

When I started thinking about how to record this recital, shooting only one video, while simultaneously allowing the family in Louisiana to view the entire recital live via Skype, I admit I was a little stumped. My resources were limited, I didn’t want to spend a lot of money to do this, and I wanted to make it as simple as possible, so here is what I decided to do.

I have a MacBook Pro and decided to use its webcam to video the recital because at the time this article was written, I did not have an external webcam that was better than the internal one.

I purchased a Blue Yeti USB mic to use because I was getting lots of feedback when using my laptop’s internal mic with Skype, so I needed an external mic to eliminate that feedback. (If you shop around, you can probably find a good price on it, like I did.) This mic will also be used for many, many projects in the future, so it was a great investment.

Next I had to figure out how to capture the actual recording, both the Skype performance, as well as the live performances. I researched several different recorders, and finally decided on Call Recorder for Skype. It was very affordable, and there are several options for recording Skype video sessions. I downloaded the free demo version first, tried it out with my Skype student, and then decided to purchase the real version after my trial period expired. (You can also record within Skype and Zoom now, so those are also options.)

Setup: This photo best depicts the studio setup I decided to use. The parents and friends had moved over to the other side of the room so Hannah, the student performing via Skype, could be seen by everyone, and so I didn’t have to move my entire setup once I had everything adjusted. The piano is just outside of the photo to the right. Students colored “Happy Fall, Y’all!” coloring sheets to decorate the mantel. Can you guess what my costume is? I’ll give you a hint. My husband was dressed as Sheldon Cooper from the Big Bang Theory…
It took several tries in the days leading up to the recital to adjust the mic to the settings that would work best for recording this recital, but I went with Cardioid setting (records only sounds that come from the front of the mic), and adjusted the Gain to approximately “ten-thirty” so that it was not overly sensitive, but would still pick up the sound of the piano without any problems. I placed my laptop on top of my very sturdy metal music stand, placed the Blue Yeti next to it, and used my external speakers so that everyone could hear Hannah perform.
Logistics:
I opened Skype, Hannah’s mom Skyped me, and we checked our audio and video settings to be sure they were correct. I set my video image size to the maximum that Call Recorder allows, which is a small size, but okay for this project.
I introduced all of my students to one another so they would all be a little more comfortable performing for one another. Most of the students who performed in this recital are new to my studio within the past few months, and they had not met each other yet.
While Hannah was performing, I had my Call Recorder recording settings set to “Remote Only” so that only Hannah would be recorded. After she finished performing, I stopped the recording, changed the settings to “Local Only”, and started a new recording so that only the students in my studio would be recorded as they performed. Hannah’s mom muted their mic after Hannah performed so the recording of the students in my studio wouldn’t pick up any sounds that may have occurred at their house during the rest of the recital.
Guests:
Hannah invited her parents and brother, all of her grandparents, and other friends to the recital, and my other students invited parents, siblings, grandparents, great-grandparents, and friends too. We had a total number of 29 guests at our live and virtual recital! The studio was a bit crowded, but it was a great afternoon.
Following the recital, we had a reception to allow the families to get to know one another, spend some time together, and celebrate the students’ performances.
Photos:
Here are photos of my students who participated:

To create one cohesive video from the two different Skype video clips, I uploaded them into iMovie, deleted unnecessary portions of the video, and added titles, transitions, and music.
Some things I learned for next time:
1. Even though we rehearsed this for a few weeks prior to the recital, be sure the students know to stand right beside the piano bench and not out in front of it towards the camera. Some heads and arms were a bit chopped off. Oops! Next time I’ll place colored tape on the floor so they know exactly where to stand.

2. Be sure students stand still while they are reading their “script” and don’t turn away from the camera. I know nerves were an issue, so next time I will remind students to stand still until they are 100% finished reading. And SMILE :)I was very pleased with how the recital went, how the video turned out, and how the Skype setup worked, and we will definitely be doing this again in the spring!

Want to learn more about how to teach online piano lessons? 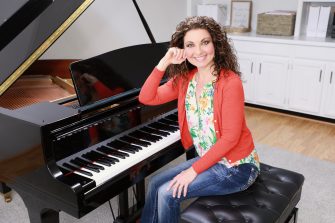 Hi! I’m Melody Payne, a pianist and piano teacher, educational resource author, a fun-loving wife to the most wonderful and talented hubby I could ask for, and a lifelong learner who loves to share. I want to make your life as a music teacher easier by writing and sharing helpful and relevant music teaching articles, and by creating educational resources with your very own students in mind. If you are a parent who wants to enroll your child in piano lessons, I’d love for us to get started building those skills that can give your child a lifetime of musical enjoyment! 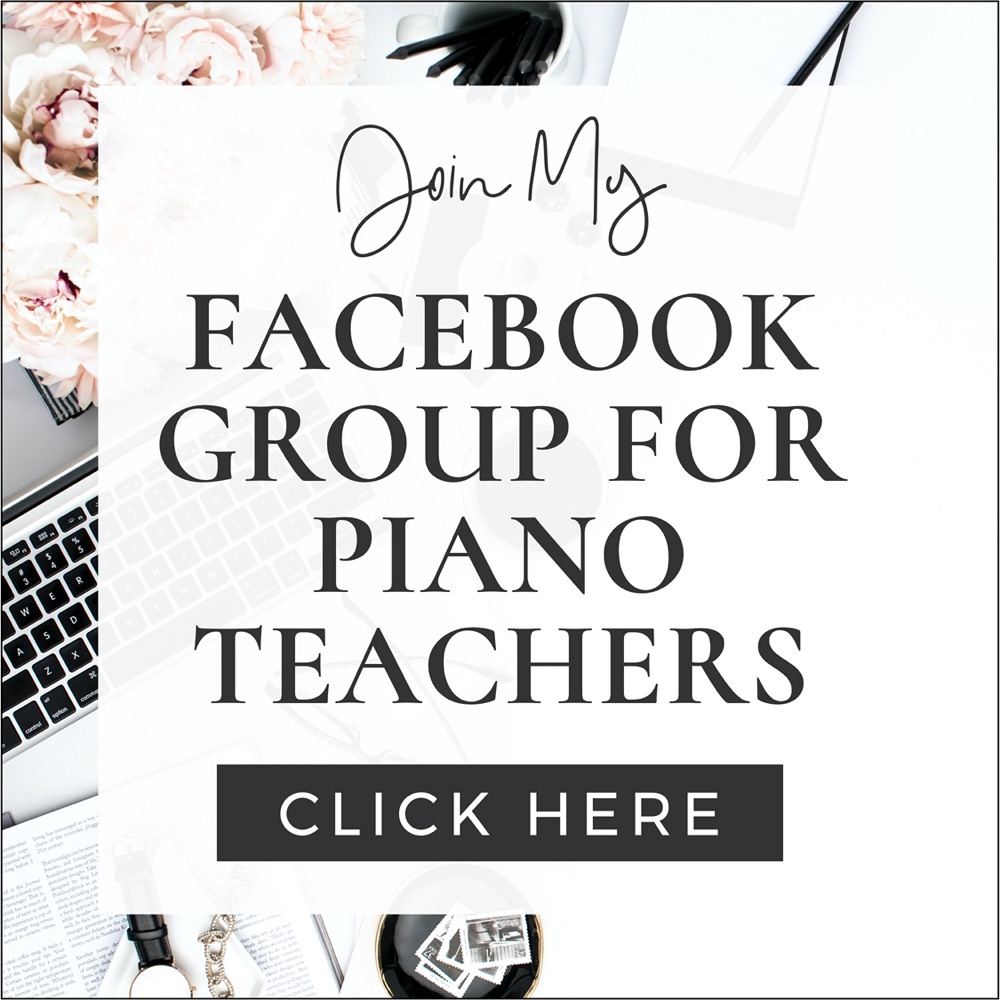 "Beethoven Says...⁠ Play the right hand while yo

I'm so happy to have this sweet one join my online

I'm still teaching all my piano lessons online, an

I have a new addition to the Superstar Scales reso

Walkin' in a winter wonderland for sure! This gorg

0
Hi! You've probably read this a million times by now, but we need to let you know that we use cookies to enable us to run this website and for it to work smoothly. Need more details?Ok, thanks!Read more...